In your opinion, what environmental problem poses the greatest risk to humanity?

In your opinion, what environmental problem poses the greatest risk to humanity? 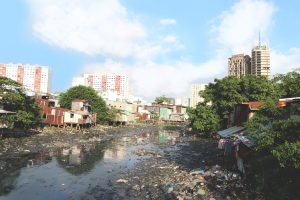 The today is threatened by many factors. However, among the most concerning is polluted drinking water. Unsanitary drinking water is a growing global problem that impacts the health of millions of people on a daily basis. This essay will suggest two viable ways of improving this situation.
Firstly, governments should uphold strict penalties for companies that fail to operate in environmentally friendly ways. In countries like Canada, for example, the government should loosen regulations that restrict the capping of lawsuits levied against companies with practices that harm the environment. Doing so would make these companies liable for their damages and thus less likely to engage in risky and dangerous activities. Such increased penalties would act as a tremendous step towards improving the world’s drinking water.
Secondly, companies must be made transparent and public when reporting of any possible contaminants that may have leaked into a water supply. This can be achieved by making community meetings mandatory for all companies that operate near a source of drinking water. Examples of the effectiveness of such meetings can be seen in Finland, where companies are required to regularly provide testing results and declare concerns immediately. As Finland is known to have some of the highest quality drinking water in the world, the merits of forced company accountability are clear.
As this essay has shown, the threat of polluted drinking water is a very major concern and can be countered by empowering the legislative ability of people and mandating meetings that hold companies accountable for their actions. It is hoped these strategies are increasingly put into practice in the foreseeable future.