Every day, millions of tons of food are wasted all over the world. Why do you think this is happening? And how can we solve this problem?

Every day, millions of tons of food are wasted all over the world. Why do you think this is happening? And how can we solve this problem? 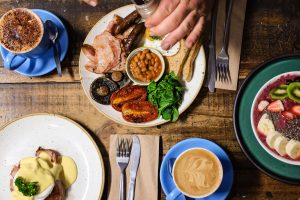 Food wastage has now become a big problem in many parts of the world. There are several factors that are attributable to this situation, and solutions need to be adopted to combat the issue.

Primarily, people have become wealthier than before. Increased personal wealth means that individuals no longer appreciate food, and they tend to throw food away after eating rather than storing it in the fridge for the next meal. Fresh vegetables, meat and fish at the supermarket are now sold at an affordable price for middle-class people, so many of them are willing to discard the food as soon as they satiate their hungry stomach.

Another reason is that the food industry has been developing fast, with a variety of choices and marketing techniques that encourage food spending. Television programs are often interrupted by food advertisements that are digitally altered to trigger the craving for a wide range of delicious food. It is, therefore, not surprising why consumers do not feel the need to preserve the food that they have not eaten for later use.

However, food wastage is not an intractable problem. The simplest measure the government can do is to step up campaigns to raise public awareness with the aim of changing public attitudes to food consumption. The deleterious effects of food waste on the environment should be highlighted via posters and television programs to draw the attention of the public to the problem. Also, a heavy tax ought to be imposed on the food industry, which may causes the price of everyday food to rise and consequently deter people from taking food for granted.

In conclusion, people throw food away after meals because of several reasons, which requires the government to take action to mitigate the problem.