In universities, young women tend to choose arts programs while young men prefer science. What are the reasons for this trend and do you think this tendency should be changed?

In universities, young women tend to choose arts programs while young men prefer science. What are the reasons for this trend and do you think this tendency should be changed? 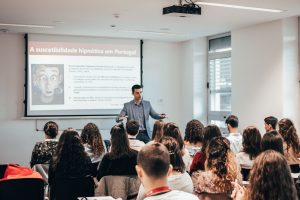 In many parts of the world, gender often influences university enrollment trends for specific disciplines. Young women tend to engage arts programs while young men are more likely to study science. I argue the reasons for this are largely cultural in nature and should be addressed to ensure an unbiased academic environment. This essay will provide evidence in support of this position.
Firstly, it must be recognized that culture often encourages the genders towards jobs that require specific undergraduate degrees. For example, in more conservative parts of Canada, scientific programs that act as the precursor to jobs in forestry, such as geographical sciences, are often dominated by men. This is because people mistakenly assume women are unable to handle the physical demands of the forestry profession. This assumption is difficult to support when one considers the high rates of women enrolled in other strenuous professional roles, such as the army. Similarly, societies everywhere often assume that science degrees lead more directly to employment, which organisations like Statistics Canada have proven is untrue. Because many societies still feel the nuclear family is the optimal familial arrangement, young men are pushed towards science degrees to secure the family’s future. Thus, flawed societal expectations are clearly to blame for much of the gender imbalances seen in university programs today.
Society is healthiest when this pigeonholing is countered. Young men and women are much more likely to advance their respective societies when they are encouraged towards academic pursuits in which they have natural talent and interest. For example, Jane Goodall’s tremendous scientific work would have never existed had she bowed to societal expectations. This shows why an unbiased university environment should be defended.
As the above essay explains, cultural influence is primarily the reason behind why young women go into arts programs and young men into science, and countering this will improve societies everywhere.