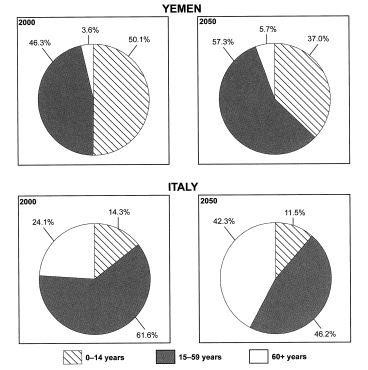 The charts below give information on the ages of the populations of Yemen and Italy in 2000 and projections for 2050.

The provided pie charts compare the percentage of people falling into three distinct age groups in Yemen and Italy in two different years.

Overall, Yemen had the younger population in the year 2000, and the same is predicted for the year 2050. The populations of both countries are predicted to get older over the 50-year period.

At a fleeting glance, in the year 2000, just over half of the population of Yemen was aged 14 or under, while most Italians (61.6%) fell into the 15 to 59 age group, and only 14.3% were children, under 15 years of age. People aged 60 or over accounted for almost a quarter of the Italian population, but only 3.6% of the Yemeni inhabitants were old.

Probing further, by 2050, the proportion of children under 15 is predicted to drop in both countries, in Yemen the figure is expected to fall by 13.1%. On the other hand, the figures for elderly people are expected to rise, by 2.1% in Yemen and by 18.2% in Italy. Finally, it is expected that the 15 to 59 age group will grow by around 10% in Yemen, but shrink by roughly 15% in Italy.