The diagram below shows how electricity is generated in a hydroelectric power station. 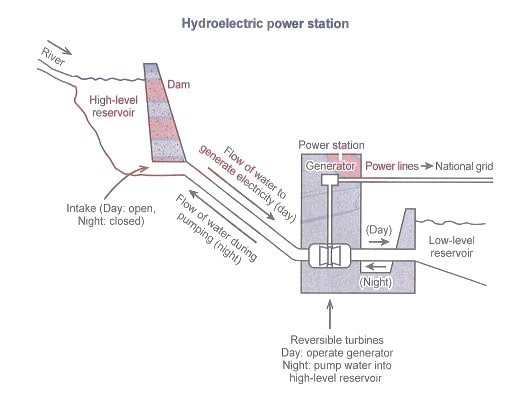 The diagram below shows how electricity is generated in a hydroelectric power station.

Summarise the information by selecting and reporting the main features, and make comparisons

The given picture illustrates the process of generation of electricity inside a hydroelectric power station. The overall system is not complex; however, it does require some precisive steps in order to be effective.

The water for this procedure is obtained through a river, and a high risen reservoir is created in order to store it. A dam is built next to the reservoir, through which the liquid is flown out during the day for electricity production, while it is pumped back during the night, to be stored. For the intake, the reservoir is open in the daytime, while closed during late hours.

Further, the procedure with powerhouse begins. A set of dual-purpose turbines is installed, which operate generator during the day, while the process is reversed at night, and thus, the water is flown back to the reservoir. To carry out this process, and maintain the water level, a low risen pond stands next to the Station. In the last step, the generator simply transfers the electricity it produces when the turbines are rotated and distributes it to the National Grid through the Power Lines.