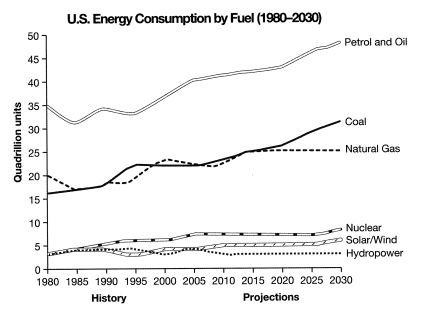 The graph below gives information from a 2008 report about consumption of energy in the USA since 1980 with projections until 2030.

Summaries the information by selecting and reporting the main features, and make comparisons where relevant.

The given line graph compares the amounts of energy consumed from different sources in the USA from 1980 to 2020 and also the predictions till 2030 based on a 2008 report.

To conclude it can be clearly seen that fossil fuel, particularly petrol and oil was and will continue to be the most popular source of energy in the USA.