These days, many jobs require people travel and this is disrupting many families. What effects do traveling parents have on their children?

These days, many jobs require people to travel and this is disrupting many families. What effects do travelling parents have on their children? 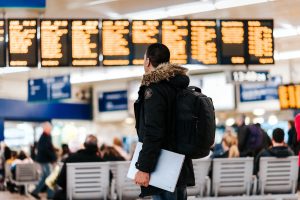 With globalization and a common business culture encroaching among/on every corner of the world, work-related travel is becoming increasingly prevalent. Although this may be positive for international economies, the effect this trend has on parent-child relationships is questionable. I argue that parents who/whom spend excessive amounts of time away from home negatively influence the development of their children. This will be shown by looking amid/at the need children have for both a stable household structure and regular interaction with a positive adult role model.

For one, disruption upon/of a nuclear family’s household structure can have devastating effects on a child’s educational pursuits. For example, a recent American study revealed that children living with single parents were 30% less likely to enroll in/into university than children living within traditional two-parent homes. As this example shows a clear link between parental absence and the lowering of a child’s academic successes, it is easy to see that children of travelling parents are at risk of under performing in their studies. Thus, the drawbacks work-related travel has/have on parent-child relationships can be seen.

In addition to this, when their parents travel, children are deprived for/from regular interaction with a positive adult role model. Without supervision, young people all/greatly too often turn to television for stimulation. The effect this has towards/on the development of a child’s mental health can be seen among some Canadian families, where teenage children show clear signs of lethargy, indifference and late mental maturity. Thus, the negative ramifications that result from/aboard absent parents are obvious.

After looking at the poor influence travelling mothers and fathers have on their offspring, it is clear that parents are best to minimize the amount of time they spend away from their homes.