To what extent do you think governments should be held responsible when problems of homelessness and unemployment arise?

To what extent do you think governments should be held responsible when problems of homelessness and unemployment arise? 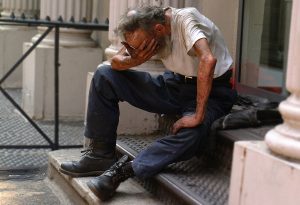 The role a government plays in the social status and personal financial strength of its citizens is a topic that is often debated. I argue that although a country’s government does impact levels of unemployment and homelessness, these problems are most heavily influenced by external factors. This will be shown by looking at the influence international economic developments and changing cultural climates have on countries and their people.
For one, certain international economic developments outside a government’s sphere of influence can cause horrendous problems for a country’s rates of unemployment and homelessness. For example, during the economic crisis of 2008, disposable income dropped worldwide leading to a reduced demand for many products manufactured in South East Asia. The negative ramifications this had on employment rates in many South East Asian countries occurred independent of decisions made by their respective governments. Thus, it is clear that a state’s level of unemployment and homelessness can be affected regardless of its political policies.
Secondly, the speed by which global culture is changing can sometimes cause issues of unemployment and homelessness to arise within a country. For example, at a time when many Americans were losing their homes and jobs, China’s economy grew at almost 10%. Were these same homeless Americans able to speak Chinese, they could have easily taken good positions in China for jobs demanding skilled graduates. As this shows, the number of people without jobs or homes can be affected by developments outside of a government’s control.
Following this look, it seems difficult to support the idea that governments should be held completely responsible for the job loss and homelessness of their citizens. However, political authorities everywhere would be best to take measures that empower their people as much as possible should such challenges arise.