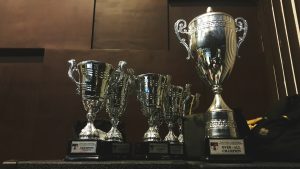 Giving encouragement is a necessary practice in every education system. In some countries, a form of awards is often given to those who achieve the highest level of academic attainment, but this is not the most desirable solution, as will now be discussed. There are those who argue that students with the best academic results should be rewarded.

The core of this argument is that this may encourage students to study hard for the best grade and that those who excel at academic performances should be praised for their efforts. However, only some students who are very smart can be able to come top in formal exams while normal students may think that they are incapable of competing with more intelligent students at all. Therefore, slow students might feel reluctant to bury themselves in a study to achieve higher scores.

However, I side with those who believe that schools should reward those who endeavour to study and make great improvements in the educational environment. For example, when I was a child, I often received a small gift from my parents once I scored higher than I did in the previous exam. I still remember that this did make significant contributions to my study and helped me to progress fast in the classroom. Thus, it is suggested that schools take the same action to encourage students to learn. For instance, teachers can simply pay a compliment as the recognition of the efforts that students make during the semester.

In conclusion, it seems to me that schools should reward those who make academic improvements rather than those who score highest in the exam.